Flamenco Caravan, while being true toÂ flamenco forms, also blends the band membersâ€™ favourite musical influences of Latin, jazz, rock, sacred and blues, capturing the imagination of the soul through guitar, rhythm and song. Between lightning-speed guitar flourishes, melting vocals, and the entire bandâ€™s driving and grooving rhythms and electric chemistry, audience members of every age have been won over. The music has been described asÂ “beautiful and magical”, “moving”, “amazing in its variety” and “alternately soothing and stirring to the soul”. The comment most often offered to the band after a performance is, “I couldnâ€™t sit still! I just wanted to get up and dance!” 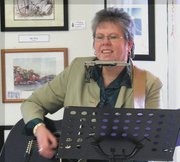