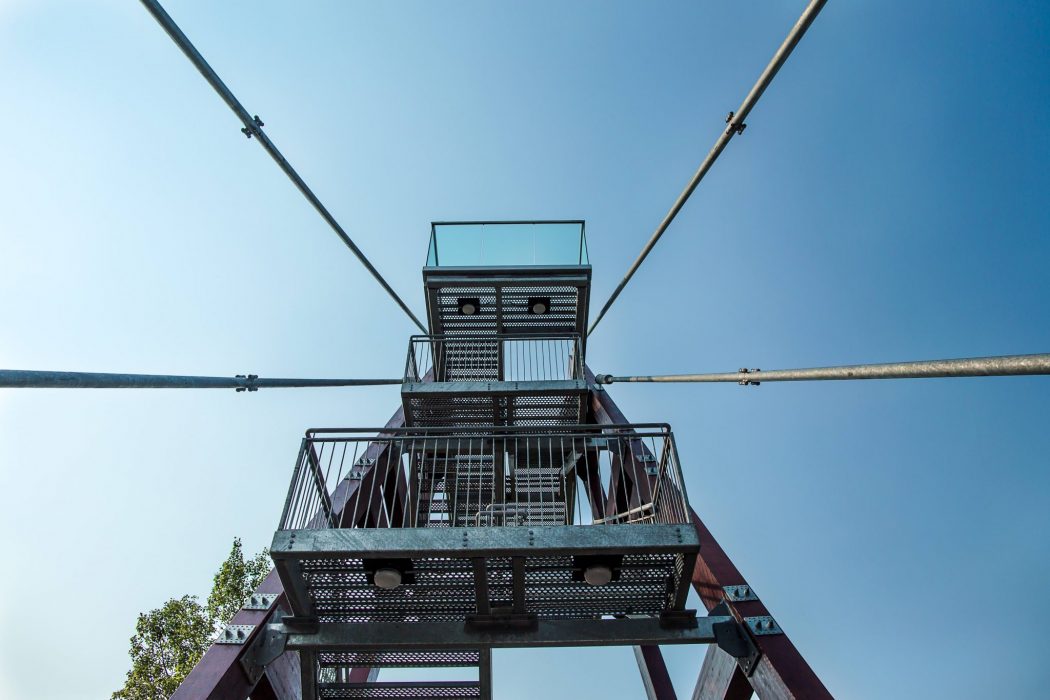 A gorgeous bird’s-eye view is always appealing—it’s why we hike up the Nor’Westers and The Bluffs or pull over at a scenic overlook along the north shore. So when Nipigon was planning its waterfront development project, a lookout tower made it to the must-do list. The 12-metre-high tower, which opened over the summer and cost $670,000, was created with the aim of drawing more visitors off the highway and into the town. 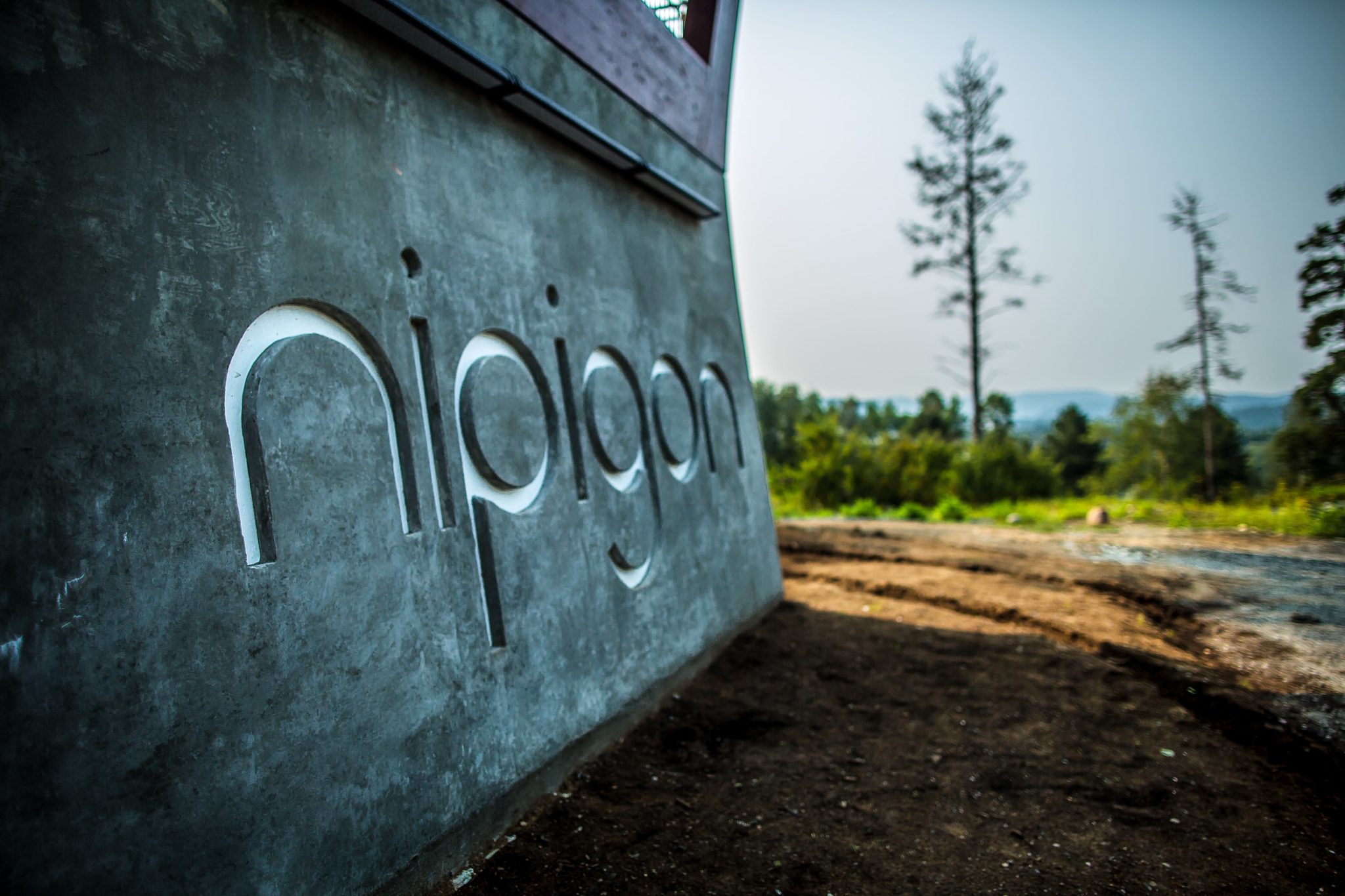 Originally, the lookout tower was envisaged as a more traditional straight up-and-down structure. However, when the actual site on Railway Street (in a parking lot on a height of land beside the river valley and adjacent to the railway) was agreed upon, the design team at Thunder Bay’s FORM Architecture Engineering realized that its proximity to the new Nipigon River Bridge called for a different design.

“One of the criteria of [choosing] the final location for the tower was the visibility of the bridge from the tower, and to some degree the visibility of the tower from the bridge,” says John Stephenson, a partner at FORM, which also worked with The Planning Partnership in Toronto and Thunder Bay’s AG Engineering. “We wanted to explore the relationship between the aesthetic experience of crossing the bridge and the lookout tower, to try to make a connection.” The Railway Street site had some sightline issues too, so they ultimately decided to lean the tower out to get the ideal view from that location. 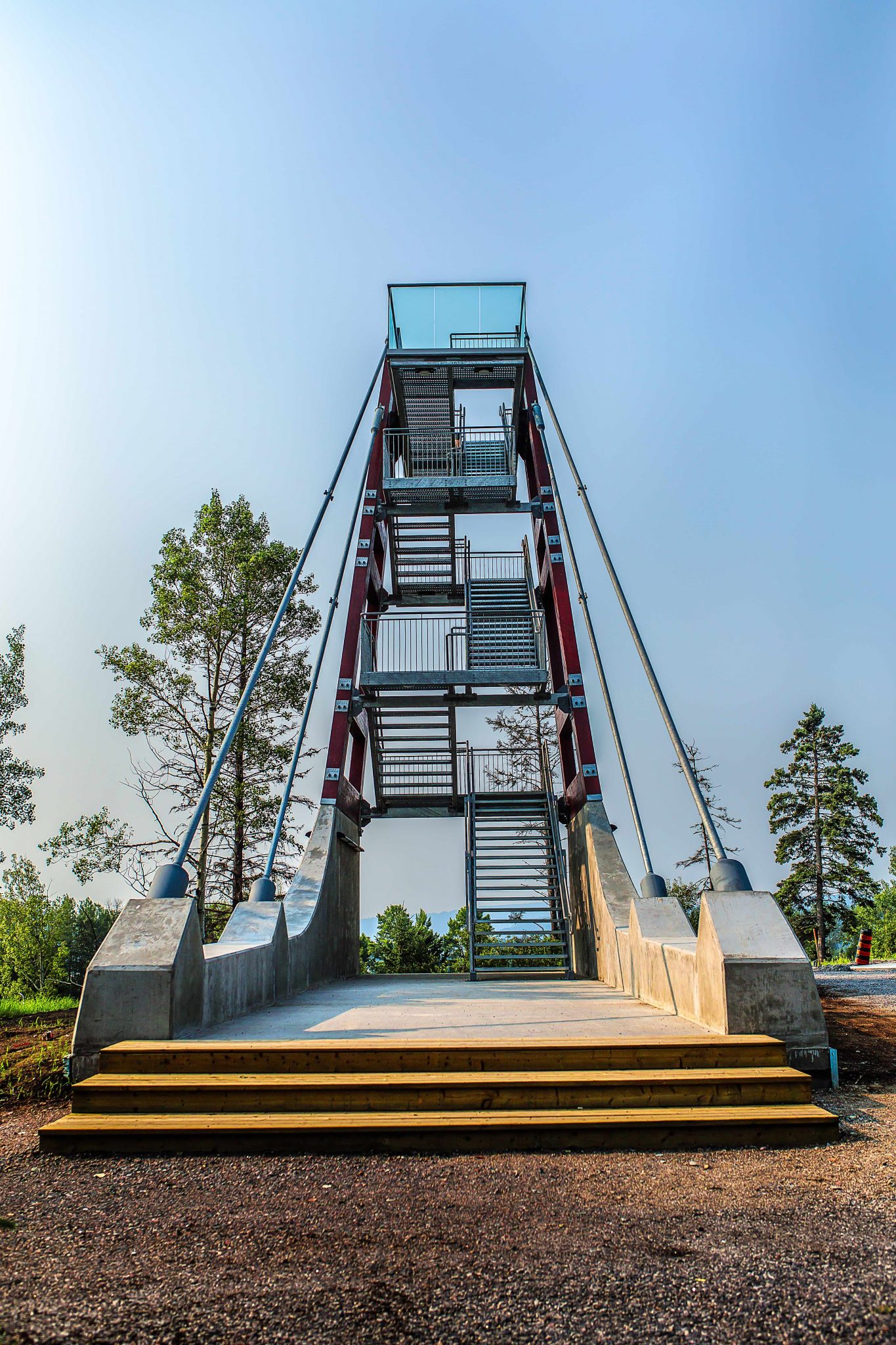 “The design that resonated with people was the idea of ‘holding’ the leaning tower back with cable stays, like the bridge,” says Stephenson. Then, they decided on materials. “We wanted to capitalize on the approach of ‘heavy timber,’ which the town had been using in revitalization work for buildings like the town offices, so we proposed the idea of timber frames for the sides and a kind of industrial/mining/railway aesthetic, supported by cable stays and a concrete base.”

The result: a lookout tower that swoops forward, created with Douglas fir frames sourced from western Canada and a steel stairway fabricated locally and galvanized in Manitoba, all topped with a platform surrounded by 1.5-metre tall tempered glass walls. The beams are sunk and bolted into the concrete foundation, which extends away from the lean to counterbalance the weight of the angled frame. “And then as a kind of ‘belt and suspenders’ approach, we have galvanized pipes that run up to the top of the tower that are made in the form of the cable stays of the bridge,” says Stephenson. “It’s a rather simple design, in a way; simple components but the engineering was interesting and the manufacturing had to be done precisely. I think it’s quite unusual and very dramatic.” 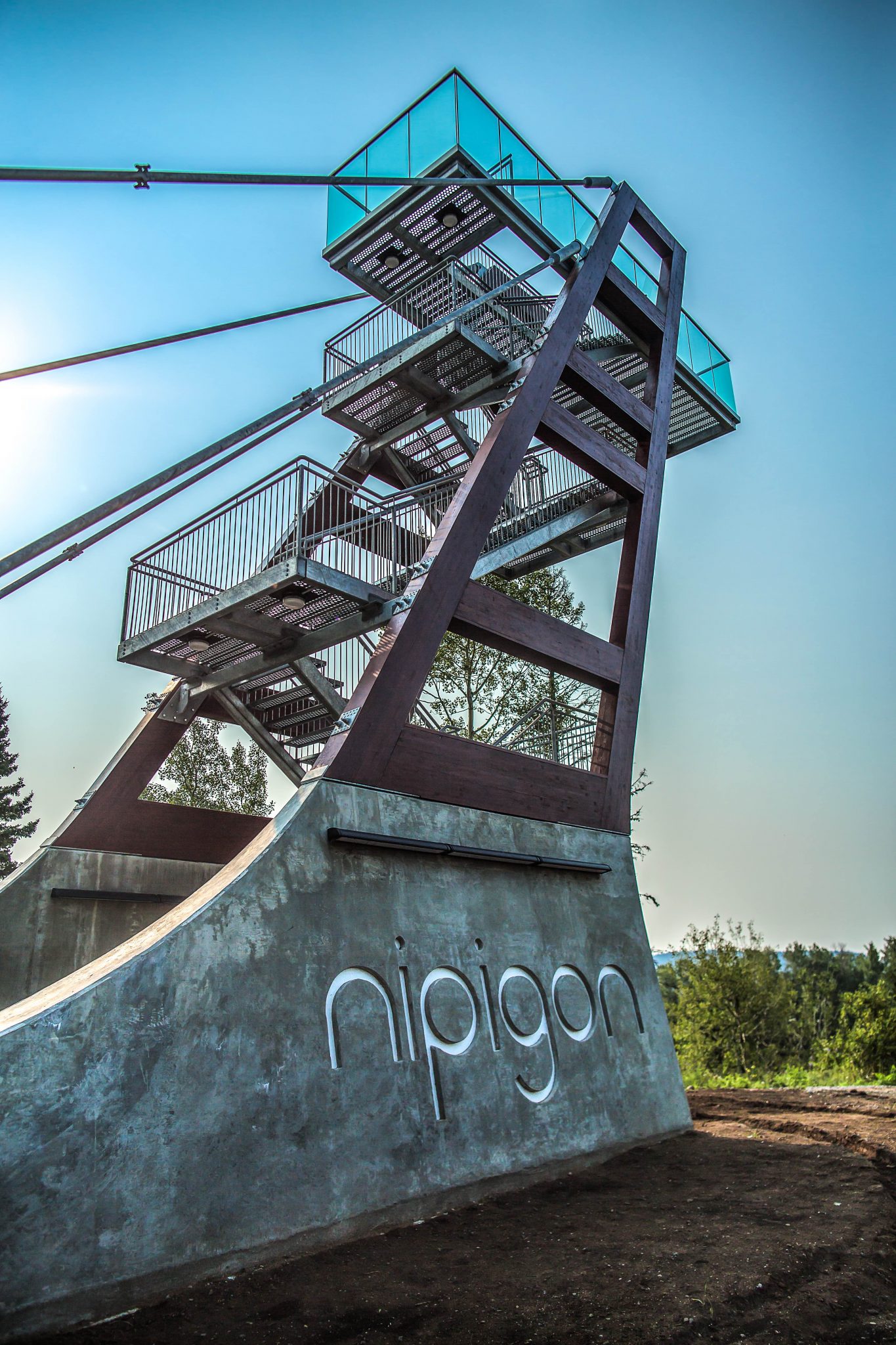 And the view delivers: depending on which direction you turn, you can see the Nipigon River Bridge, the town waterfront, the river valley and even Lake Helen. The lookout tower will eventually have a trail connection to the pedestrian underpass on the bridge as well. 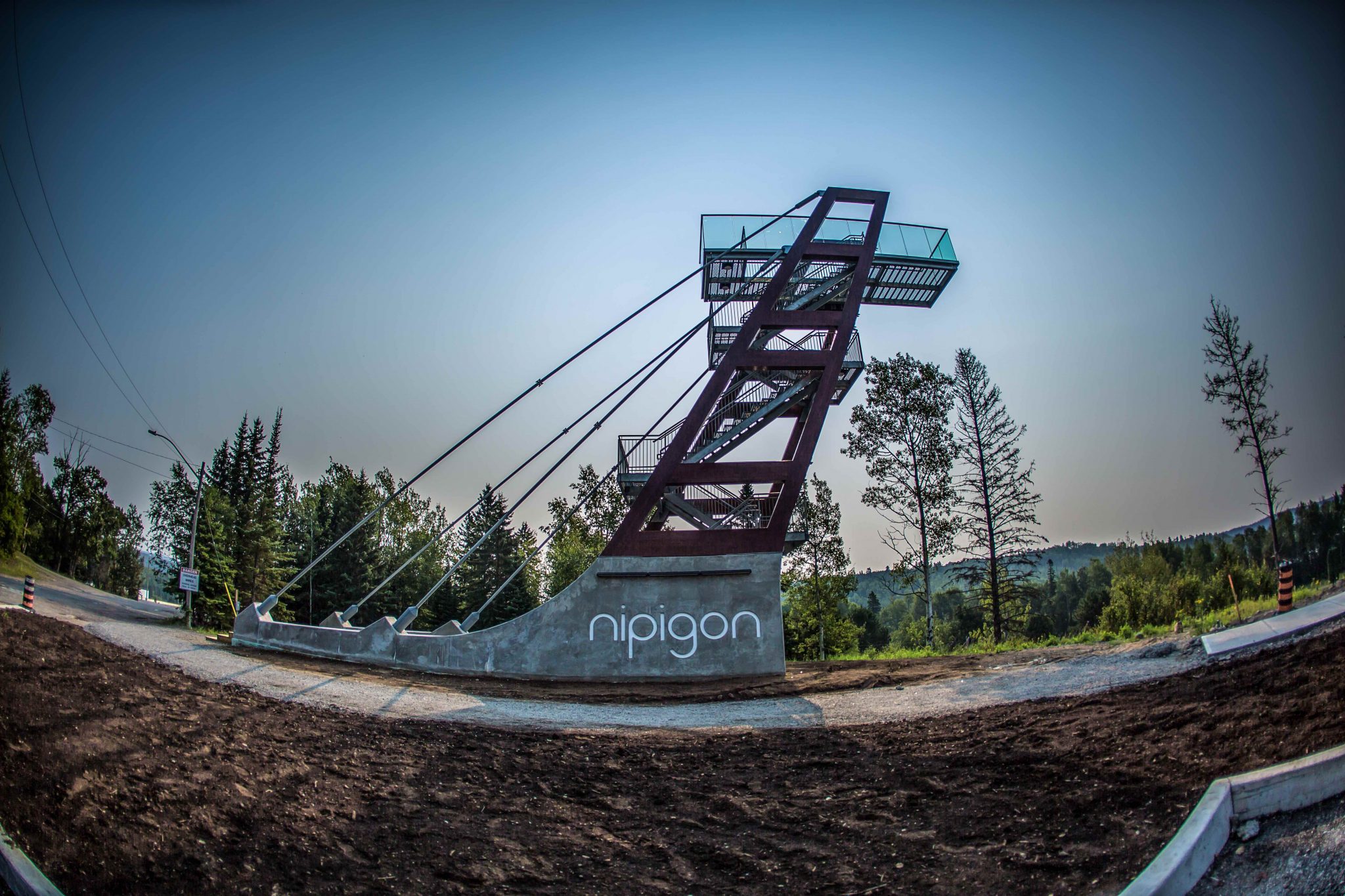 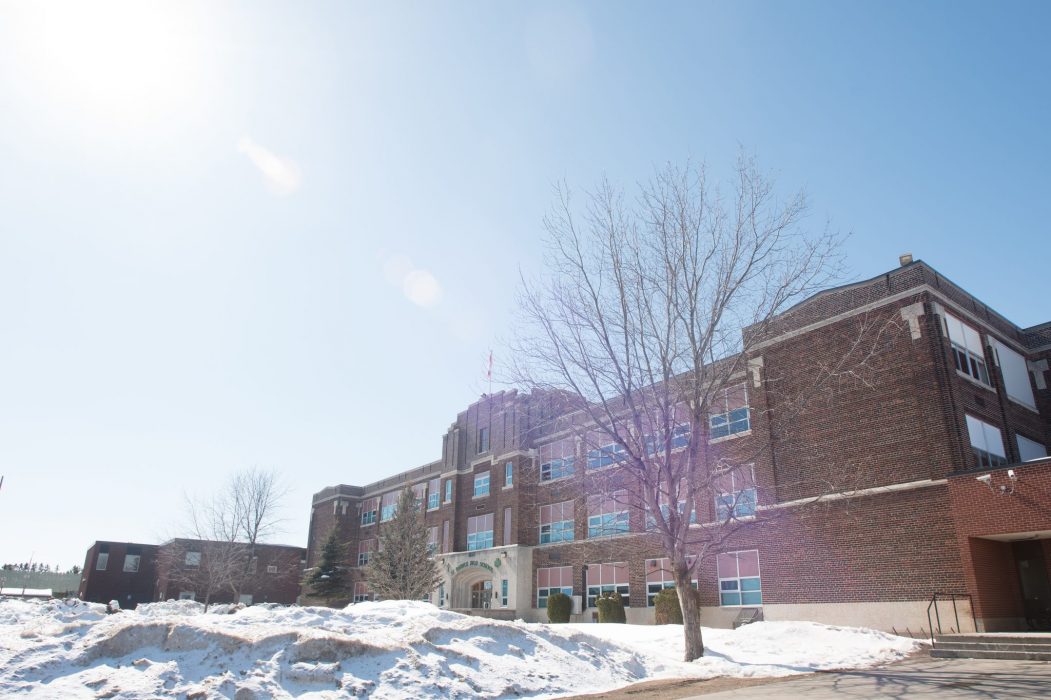 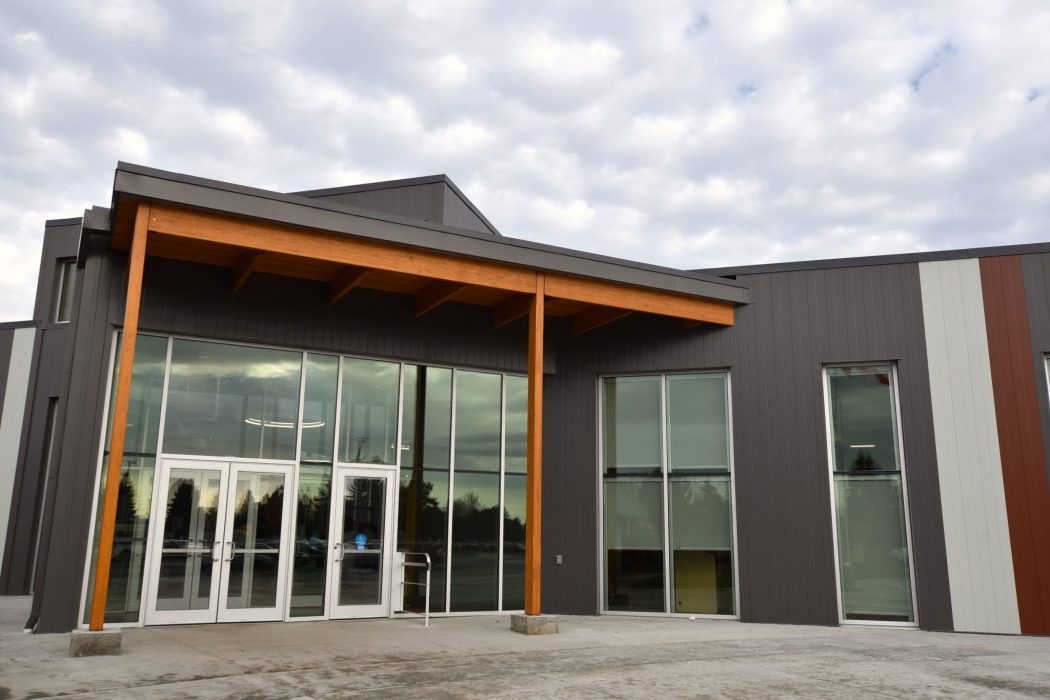 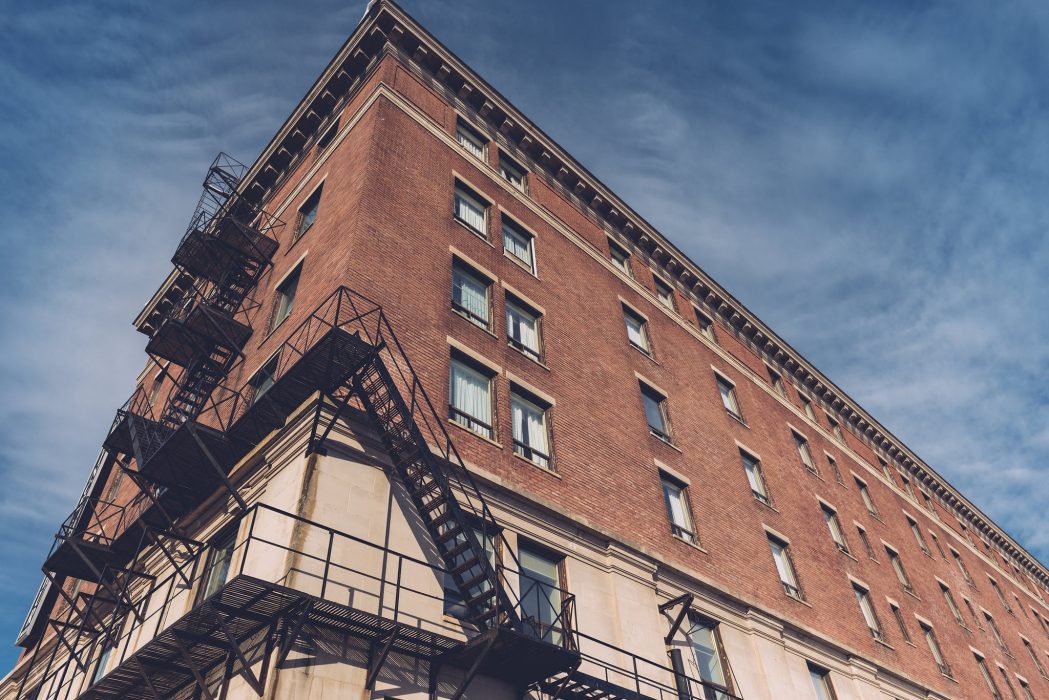 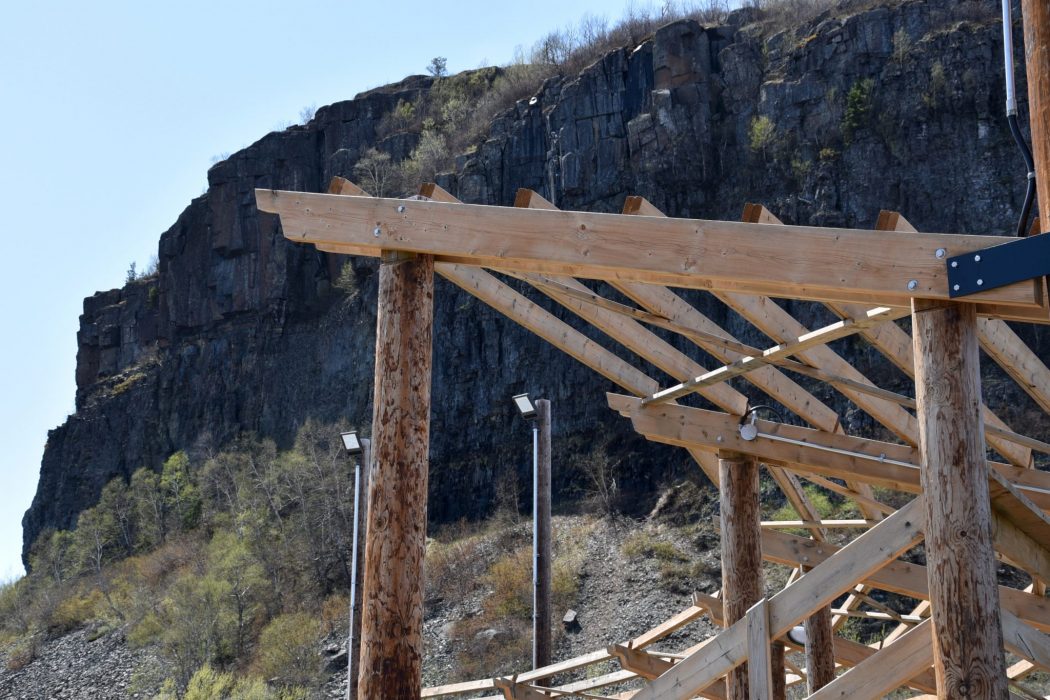