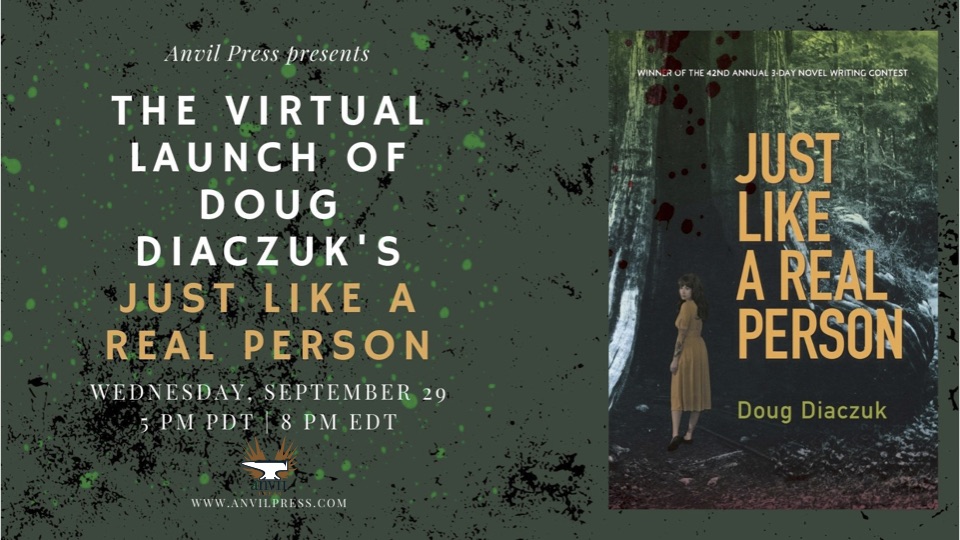 Join Anvil Press and the International 3-Day Novel Contest in launching Doug Diaczuk’s winning novel Just Like a Real Person!
Join us on Zoom at 5 p.m. PDT | 8 p.m. EDT.
Admission is free and open to all. You can purchase the book at www.anvilpress.com or from your favourite local independent bookstore.
ABOUT THE BOOK
JUST LIKE A REAL PERSON
Winner of the 2019 3-Day Novel Contest
Just Like a Real Person is a story about broken cars and broken people. A story of intoxication, sobriety, and potent memories of a woman in a yellow sundress. But, it’s also a story about love that asks what it means to finally feel, after years of feeling nothing but numb.
The story begins with a crash, and throughout the story, we bear witness to many more — both literal and metaphorical — as cars wrap around lamp posts and jump medians, and as the humans inside them are unknotted from smouldering metal and the entanglements of their choices.
“He” is a nameless, indiscriminate addict. A fuck-up without a driver’s license, who has caused forty-two car crashes in eight years, and makes his living by picking through the shattered belongings and lives he leaves behind. “She” is Lola, and Lola is unsure where she’s going, just that it’s far from there.
Disorienting as an acid trip, the story winds through the aftermath, watching as he collides with recovery, women, and his own imperfect recollections while searching for the elusive girl in the yellow sundress.
ABOUT DOUG DIACZUK
Doug Diaczuk is a reporter and photographer living in Thunder Bay, Ontario. He has a master’s degree in English Literature and has worked in the environmental and communications field in Northern Ontario, as well as several years as a freelance journalist. Chalk is his first published novel.
​​
Anvil Press publishes on the traditional unceded territories of the xʷməθkʷəy̓əm (Musqueam), sḵwx̱wú7mesh (Squamish) and səlil̓wətaʔɬ/Selilwitulh (Tsleil-Waututh) First Nations.
A link to the Zoom event will be posted in the Facebook event description and in the discussion on the day of the launch.
+ Google Calendar+ iCal Export