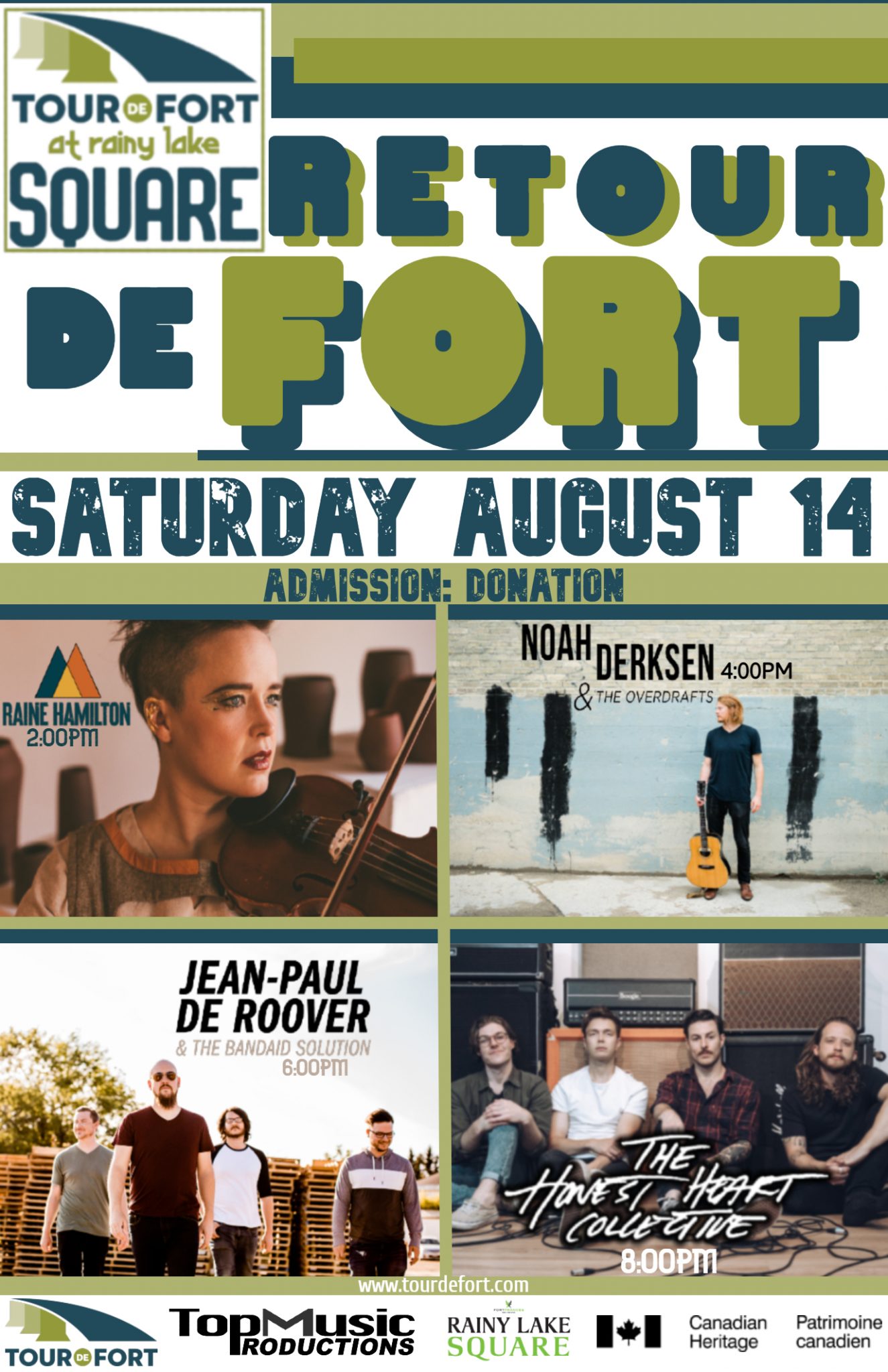 TOUR DE FORT IS BACK!

Eighteen long months after the COVID-19 pandemic forced the cancellation of public
gatherings, Tour de Fort (www.tourdefort.com) is thrilled to announce the return of touring acts
to the Rainy River District with the generous support of Heritage Canada.

On Saturday, August 14th, join us for RETOUR de FORT, an opportunity to celebrate live music
at Rainy Lake Square. This event is open to everyone, and admission is by donation in support
of Tour de Fort.

RAINE HAMILTON
www.rainehamilton.com
2PM Set Time
Raine Hamilton is part prairie songstress, part story weaver. Raine invites her love of the violin
into the singer-songwriter genre, writing for violin and voice, as well as for guitar and voice.
Raine’s latest work, Brave Land (2021-22), is a concept album about mountains, and the
courage, wisdom, and otherworldly connection they represent. Here, as in Raine’s 2018 album
Night Sky, her songs are set to intricate and seasoned arrangements for guitar, violin, cello, and
double bass. Raine is the recipient of the 2018 Canadian Folk Music Award for Emerging Artist
of the Year. Raine believes that music is for everyone. An experienced educator, Raine offers
workshops in songwriting and fiddle tune writing. She also offers concerts with American Sign
Language (ASL) interpretation, to help make live music more accessible to the Deaf community.

NOAH DERKSEN & THE OVERDRAFTS
www.noahderksen.com
4PM Set Time
Noah Derksen is an American-born singer-songwriter raised in the heart of the Canadian
prairies who matured on the west coast of British Columbia. In 2019 Noah released his third
full-length album entitled America, Dreaming. The album was produced by JUNO-award winning
producer Murray Pulver, and features artwork by another JUNO-award winner Roberta
Landreth. America, Dreaming represents an observation of the United States and Noah’s
identity as an American citizen. Noah writes with the groundedness of harsh Manitoba winters
mixed with the optimism of the BC coastline. He currently lives in the West End neighbourhood
of Winnipeg, Manitoba.

JEAN-PAUL DE ROOVER & THE BANDAID SOLUTION
www.jeanpaulderoover.com
6PM Set Time
Jean-Paul De Roover’s musical upbringing was anything short of ordinary. Inspired to play
music after reading a book about a child violinist, he begged his parents to learn to play violin.
He was promptly coerced into piano lessons. After two years, he had the opportunity to learn
violin in Pakistan, where he was immediately disappointed with his progress and stopped. In his
teens, he was gifted a handmade Bolivian guitar and taught himself his first Beatles song. This
Belgian-Canadian has toured across North America and Europe, sharing stages with artists
such as the Beach Boys, Goo Goo Dolls, and many more. His music and videos have been
featured on CBC and MuchMusic. Jean-Paul’s most recent records Love (2019) and Loss
(2020) were recorded in his own Blueprints Studio.

THE HONEST HEART COLLECTIVE
www.honestheart.co
8PM Set Time
THHC was born from brothers Ryan and Nic MacDonald, a moment at a Bruce Springsteen
concert, and a rotating cast of musicians made permanent. Buoyed by the backdrop of their
Northern Ontario roots, the band embodies an old soul take of heart-on-sleeves storytelling
through music. THHC followed their 2015 debut Liar’s Club with 2018’s Grief Rights which
combines classic rock n’ roll sensibilities with ‘90’s rock touches and the blue collar ethos of
Springsteen for a sound that stands on its own. THHC has toured extensively throughout
Canada including legendary venues such as Toronto’s Horseshoe Tavern and Ottawa’s Zaphod
Beeblebrox. In addition to their original material, THHC comes armed with an impressive array
of reimagined cover material packaged as the Rock Revival, a staple of the Thunder Bay music
scene. On October 8th, THHC is releasing their new record, More Harm.

TOUR DE FORT is a non-profit organization run totally by volunteers. Every dollar raised
through the sale of passports and the generous support of sponsors goes back into the concert
series and supports the performing arts in the community. Tour de Fort is dedicated to
presenting the Rainy River District with high-quality professional entertainment with Canadian
emphasis, at an affordable cost.