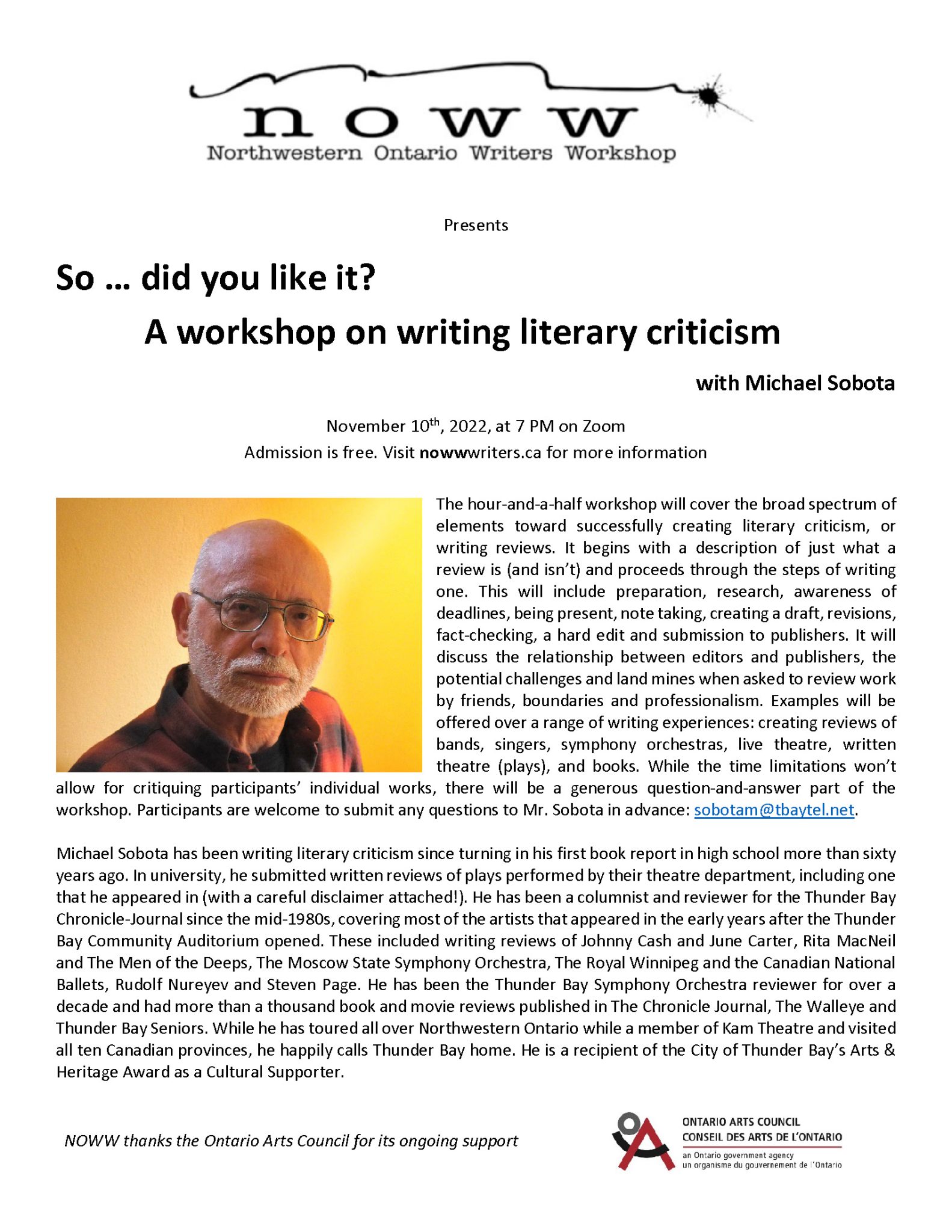 A workshop on writing literary criticism

The hour-and-a-half workshop will cover the broad spectrum of elements toward successfully creating literary criticism, or writing reviews. It begins with a description of just what a review is (and isn’t) and proceeds through the steps of writing one. This will include preparation, research, awareness of deadlines, being present, note taking, creating a draft, revisions, fact-checking, a hard edit and submission to publishers. It will discuss the relationship between editors and publishers, the potential challenges and land mines when asked to review work by friends, boundaries and professionalism. Examples will be offered over a range of writing experiences: creating reviews of bands, singers, symphony orchestras, live theatre, written theatre (plays), and books. While the time limitations won’t allow for critiquing participants’ individual works, there will be a generous question-and-answer part of the workshop. Participants are welcome to submit any questions to Mr. Sobota in advance: sobotam@tbaytel.net.

Michael Sobota has been writing literary criticism since turning in his first book report in high school more than sixty years ago. In university, he submitted written reviews of plays performed by their theatre department, including one that he appeared in (with a careful disclaimer attached!). He has been a columnist and reviewer for the Thunder Bay Chronicle-Journal since the mid-1980s, covering most of the artists that appeared in the early years after the Thunder Bay Community Auditorium opened. These included writing reviews of Johnny Cash and June Carter, Rita MacNeil and The Men of the Deeps, The Moscow State Symphony Orchestra, The Royal Winnipeg and the Canadian National Ballets, Rudolf Nureyev and Steven Page. He has been the Thunder Bay Symphony Orchestra reviewer for over a decade and had more than a thousand book and movie reviews published in The Chronicle Journal, The Walleye and Thunder Bay Seniors. While he has toured all over Northwestern Ontario while a member of Kam Theatre and visited all ten Canadian provinces, he happily calls Thunder Bay home. He is a recipient of the City of Thunder Bay’s Arts & Heritage Award as a Cultural Supporter.

NOWW thanks the Ontario Arts Council for its ongoing support