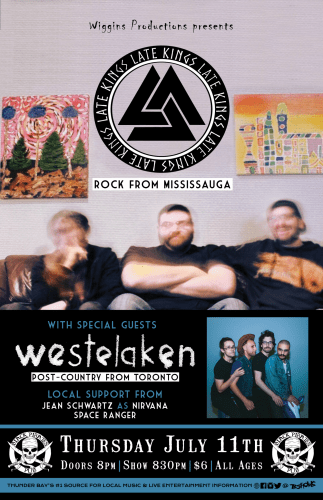 WITH SPECIAL GUESTS
Westelaken (post-country from Toronto, ON)

LATE KINGS is a loud 3-piece rock band from Mississauga, Ontario. Formed by Jeff Santos (Guitar/Vocals) and Mike Vesia (Bass), the full lineup came together in August 2018 with the addition of Sean Winick (Drums). A sound consisting of aggressively elegant vocals, powerful guitar, chunky bass and thunderous drums it’s hard to believe there are only 3 people on stage. From fast paced, high-energy tunes to open, emotional and melodic ones, Late Kings speaks to everyone. The band is currently recording their debut LP, playing shows around the GTA and touring western Canada July 2019.

WESTELAKEN is a four piece post-country band formed in 2017 from Toronto Ontario. The band elegantly balances the emotional directness and narrative lyricism of traditional country music with noisy atmospherics and wild dynamics. Guitarist, singer, and songwriter Jordan Seccareccia grew up obsessed with heavy metal before falling in love with country music; Lucas Temor is a classically trained pianist who synthesizes formal training with contemporary, expressive playing; bassist Alex Baigent holds the band down with tight punk inspired grooves; and Rob Mclay’s precise and lyrical drumming reflects his own years of experience as a pop songwriter.

The band’s 2018 self-titled debut is in turns explosive, expressive, and gentle. Westelaken marks a major success for a band so new: along with college radio support, the 9-song LP remained in Bandcamp’s Top 5 in the #Toronto, #Country, and #Post-Country tags for over two weeks. The band was also included in Now Magazines “101 Best Toronto Songs of 2018” list. Tapes, 7” lathe cuts, and t-shirt orders have been made from fans as far as the United Kingdom. A regular act in Toronto’s local live music scene, Westelaken has delivered dynamic and engaging live performances at such notable venues as Lee’s Palace, the Horseshoe Tavern, and The Baby G.

Grey Owl Point – “Westelaken wear cowboy boots in mosh pits. Okay, maybe they don’t but from the sounds of their mix of bedraggled pop-punk and honky-tonk country, that’s something Westelaken fans could do at shows.” Laura Stanley

Now Magazine TBA – “Westelaken might have all gotten sick on that tour but they don’t sound any worse for wear in their own TBA video. Vocalist and guitarist Jordan Seccareccia’s weathered vocals only add to the band’s earthy roots rock. Declare Yourself The Moon opens Westelaken’s set with a relaxed feel, only to have the band dial it back up for White Lichen, a song that turns their barroom contemplativeness into a brawl.” Michael Rancic

Under the Counter Tapes (VIA Bandcamp) – “Hyper-literate record which stylistically is super hard to pin down. There’s country blood pumping through its veins, but it’s far too diverse to pigeonhole as such between up-tempo rockers like “Staring at Americans” and the title track, to quieter tracks like the opener and “I Was a Vulture”. There’s folk, country, punk, pub rock, piano rock, all blended and amplified in different ratios depending on the moment. There’s not much I can directly compare it to. That’s how you know it’s special.