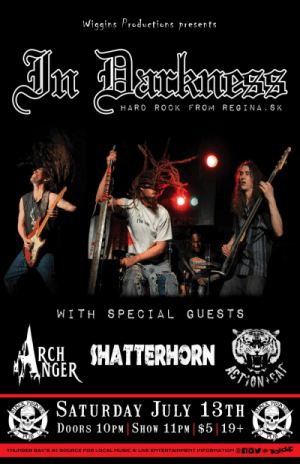 BIO – Founded in 2003, In Darkness has been a band of constant change and evolution. Described by fans as anything from “a mixture of Tool, Pantera, and Metallica” to “Pearl Jam on Steroids”, there is definitely a sound for everyone in this Heavy Rock/Metal Quartet.

The wild musings of guitarist, Ryan Sawchyn, are reminiscent of an era when rock and roll was alive and well, and not generically mass produced. As if he were the musical child of Jimi Hendrix and Dimebag Darrel, his mellow grooves entrance, and his solos will leave you staring, mouth agape, wondering what the hell is coming next.

Drummer Andy Silljer is a hard hitting human metronome. With a style somewhere between John Bonham and Neil Pert, his driving beats will keep you headbanging the whole show through. Unafraid of the spotlight, Andy’s solo in The March of War can only be described as furiously rock and roll.

Bassist Dustin Billinski, aka Johnny Youngfeller, is the newest addition to the band. His often chaotic antics and “In the music” stage presence will make anyone’s day, as he steals the spotlight from the rest.

Wielding a sword and chain mic stand, singer Cory Sawchyn takes the front of the stage to round out the musical marvel that is, In Darkness.

FOR FANS OF: Tool, Pantera, Metallica, Rage Against the Machine